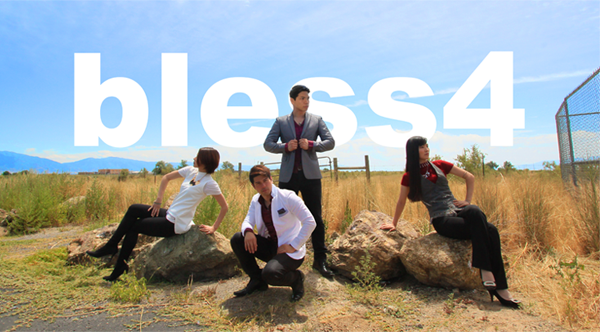 bless4 is a chorus, dance group composed of four siblings – AKASHI, KANASA, AKINO, and AIKI.
AIKI, finally came back after a 2 year rest from the group as he was out volunteering.

They formally debuted in 2003 with BGM Japan with the single “Good Morning! Mr. Sunshine”.
In 2009 they contributed to Disney’s animated series Stitch with the ED theme “Stitch is Coming!” and the insert song “Hitori Jyanai”.

AKINO made her solo debut at the age of 15 in 2005 with the song “Sousei no Aquarion”, the OP theme of the anime series “Sounsei no Aquarion”.
The iconic phrase “♪一万年と二千年前から愛してる♪” (I’ve loved you since 12,000 years ago) once again caught everyone’s attention
Then 2 and a half years after its release and stormed the charts:
#1 hit in Oricon Ring Tone Ranking, iTunes Download Ranking, AMAZON CD Ranking, Karaoke Ranking, etc!
It was also awarded the “2009 JASRAC” Silver Award.

bless4 work together in different forms to continue to amaze the world with their vocals and performance.
2011:
“Yumetsumugi”(Album) placed #3 in Billboard Japan

2012:
“Kimi no Shinhwa～Aquarion dai ni shou” placed #3 on the Oricon Charts, and #1 in anime category ranking.

2015:
“Miiro” OP theme for the hit anime series ‘Kantai Collection’ ranked #2 on the Oricon Charts shortly after its release
“Let’s Have A PARTY♪” is known for its rhythmical beats and fun dance, spreading to people all over the globe
“Decennia”(Album) AKASHI has made some songs in this album, as well as in some previous CD singles

2016:
“Golden Life” OP for the Anime ‘Active Raid’
“OVERNIGHT REVOLUTION” OP for a game ‘Soku no Revelation’
“cross the line” OP for the anime ‘Izetta: The Last Witch’

This year's AWA will be held virtually December 18 - 20, 2020. Follow us on twitch at https://twitch.tv/awacon for the live stream and join our discord at https://discord.gg/VKSQ4wB