A Celebration of Billy Kametz at AWA 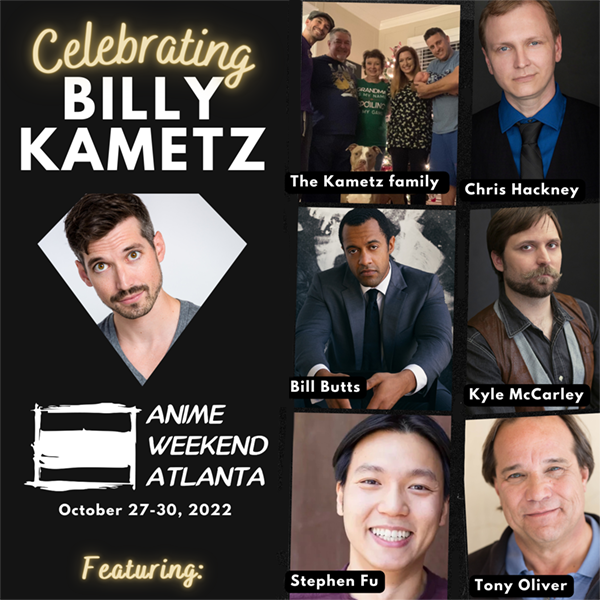 As you may know, on June 9th the anime community lost a beloved voice actor, Billy Kametz. Billy provided the voice for some of our favorite characters, including Ferdinand von Aegir in the Fire Emblem series, Naofumi Iwatani in season one of The Rising of Shield Hero, and Josuke Higashikata in JoJo’s Bizarre Adventure: Diamond is Unbreakable, among dozens of others.

We were fortunate to have Billy join us for AWA 2018 to announce his role as Osomatsu, and we are so glad we got the opportunity to meet him and work with him. He was so excited to be a part of the convention, and so grateful to all of his fans for helping him get there.

After his passing, it was clear that not just family and friends were deeply affected by his loss, but fans of him and his work too. Billy loved his fans, and it’s clear you loved him too, contributing over $100,000 to help cover his treatment.

In honor of Billy, AWA is working together with the Kametz family, as well as some of his closest friends and colleagues in the industry: Bill Butts, Stephen Fu, Chris Hackney, Kyle McCarley and emcee Tony Oliver, to host a celebration of Billy’s life and work for his fans to attend. We hope you’ll join us on Sunday in Main Events. We’ll also be announcing other ways Billy’s fellow actors will be paying tribute throughout the convention weekend as we get closer.

AWA is the largest anime convention in the Southeast, with over 32,000 unique attendees in 2022.